Functions of the gut microbiome

Functions of the gut microbiome can be classified in 3 categories:

The gut microbiota’s metabolism can be viewed as an extensión of the human metabolism. Others have decribed the gut microbiome as a ‘virtual organ’ because their joint metabolic activities are equivalent to those of a physical human organ.

Thank to this “extension” or “virtual organ” we can obtain nutrients and energy from food components that we are unable to digest. This is because they possess the enzymes necessary for these processes while humans, and mammals in general, have lost the genes encoding these enzymes.

Important examples of these functions are:

Our gut microbiota can also be viewed as a “shield” or “army” because they protect our gut from invasion by “bad microbes” with the potential to cause disease.

Their strategies and weapons are several:

Both strategies are based on competition. Essentially, microbes compete for space and food. If the good microbes are where they are supposed to be, they are taking up space and food that can’t be used by bad microbes coming from outside or normal members of the microbiota that are harmless when they are occupying their niche, but harmful when they try to occupy a different one. 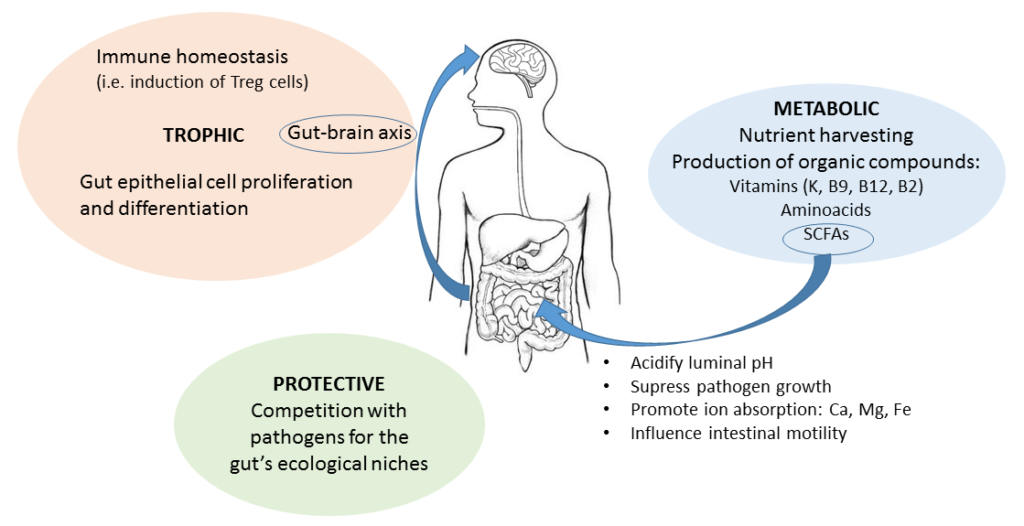